The 2018 River Bend Gun Club (RBGC) Run and Gun is over and it was a ton of fun. This was my first type of match like this, and it won’t be my last. The format is pretty much a 5K with guns and obstacles, so what’s not to like? I was fortunate enough to shoot well enough and run/walk fast enough to win 1st place. 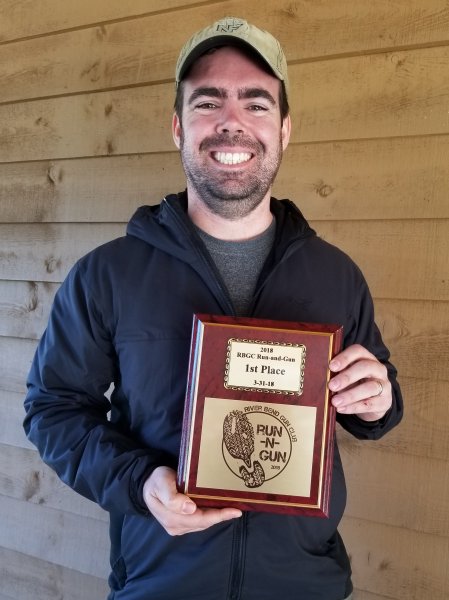 The actual course was a 3.2 mile run around the hills and ranges of RBGC. Many thanks to the club and BoD for allowing us to do this! There were 5 stages and some obstacles thrown in to make it interesting along the way.

From the start at cowboy town, you ran down the hill and through the main entrance to MP2 for the first stage. After negotiating a rope obstacle (try not to get hung up!) you were greeted by RO’s who checked to make sure your rifle and pistol were clear and then explained the stage. Your pistol was placed in a box on the ground and your rifle inside the “helicopter” with you. On the beep, you loaded your pistol and engaged 8 steel plates, placed the pistol down and then loaded your rifle for 16 diamond steel plates at about 75 yards. All shooting was done inside the helicopter, remaining inside and not touching the ground outside. I shot the pistol from my knees, then engaged the rifle plates from a reverse kneeling position using the window as a brace. My scope was on about 2.5x, which allowed for enough magnification to place the circle of the reticle inside the plate, and still see targets easily to transition quickly. I had a couple extra shots on both pistol and rifle from trying to control breathing but finished the stage in 34.92 seconds. Once done, you cleared your rifle and pistol and took off to the next stage.

After MP2, you ran the main road to down by the creek, then ran along the creek and crossed it via some large boulders. With that done, you ran up-hill to the 600 yard line of the Hi-Power range where more RO’s were waiting. At that point, they cleared your guns again and gave the brief. Located at about 100, 300 and 600 yards were pieces of steel to be engaged with the rifle only. At the start signal, the 100 yard steel needed 3 hits, then you went prone to engage at 300 for 3 hits and finally 1 hit needed at 600. I shot at about the same 2.5x for the first two distances, where I had an extra shot or two standing and went for a very quick 3/3 at 300. The 600 I took I believe 5 shots to get a hit. I rushed the first shot, took a second good shot at a center hold, then bracketed left then right as I shot early and had no wind indicators.. and the nice muck absorbed my 5.56 rounds without any splash. I was at about 6x for this shot and made it holding about a half of a mil off the right edge. After I finished the RO said I missed left for my first couple shots. The lesson here when you can’t see, don’t keep holding the same shot! It just took me a couple shots until my rotation of bracketing got right. This took me 44.97 seconds to complete. Once again, they checked both pistol and rifle clear and off to Stage 3.

Stage 3 was a run down the hill from the Hi-Power range, then up the hill to the AP complex. This was a pistol only stage, which had 6 paper targets that needed 2x A zone hits to prevent a penalty. They were standing in a variety of positions and some had no-shoots in the way (which did incur penalties if hit). I ran this in 21.86 huffing and puffing, but had a clean run. After checking both guns were clear again, it was off to the longest running portion of about a mile and a half back to cowboy town. Along the way there was a low-crawl under some wires, and two A frames to go up and over on. The last 1/3 of this run was up the gradual hill from the main range area, then up the hill to cowboy town.

At cowboy town, Stage 4 was a blind stage that was pistol only. There was a door that had to be “breached” by kicking, pushing or ramming as you saw fit. Once through, there were 4 pistol targets outside the back of the shack that needed 2x A hits a piece. I ran this one in 12.74 from the unloaded and holstered start. From here, we ran down to the bottom of the hill for the last stage, which was rifle only. Here, you had an unloaded rifle start and then 5 targets from around a wall that needed either 2x A hits in the body, or 1x head shot a piece to neutralize. The targets were partially covered by “hard cover”, making for partial A zones. I opted to just go for head shots and fired 2 a piece more out of habit for an insurance shot each… which worked out to 14.11 seconds. After this you just had to run to the top of the hill to the finish line. The last 100 yards always seemed the toughest, but I ran it out as hard as I could. My total time with shooting, briefings, obstacles and all was 51 minutes and 11 seconds. Taking out shoot time my run time was 49 minutes and 2 seconds. 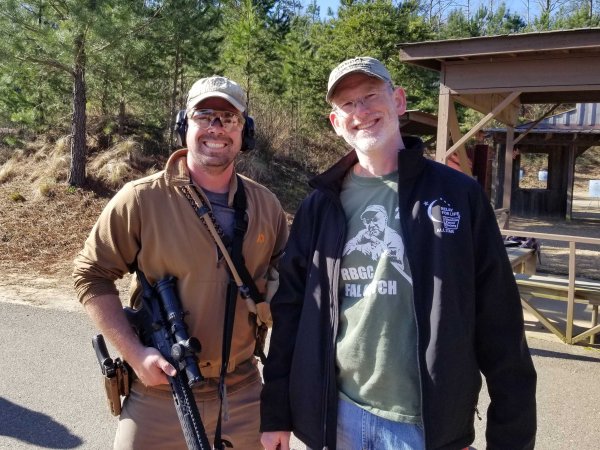 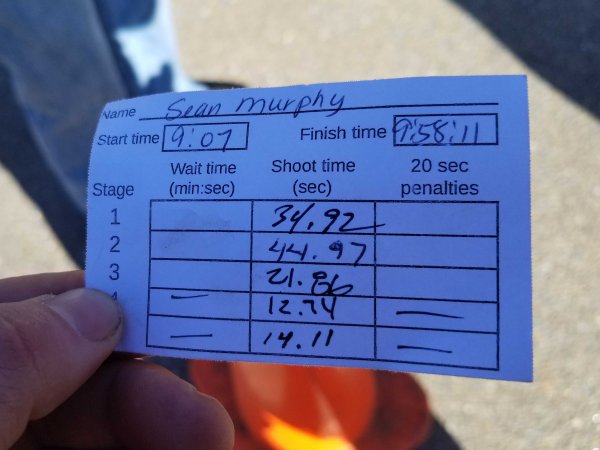 As I shot early, I didn’t have to wait on other shooters for any stages. If there was a backlog of shooters, you used a stopwatch to keep track of the wait time as directed by the Range Officers on the stage. This would then be taken off your run-time. On one hand, a few minutes might have been nice for some breathing time, but also having to wait would have been too much of a cool down to try to restart.

My run strategy since I’m not a regular was some running down-hill, jogging on the flat spots and speed walking on the up-hills. In practice it generally worked out that way, but I needed to do a few 20 yard or so walks in a few extra areas.

As you went along, you had to manage your ammo, mags and other kit. Every stage started unloaded, and there was no prep time at any stage other than the RO giving you the CoF. That meant trying to do some ammo management on the run and preparing before you got to the stage. My strategy here was a fresh mag for every stage (since stages were broadcast ahead of time), dumping partial mags into my bag and then loading my belt with the next stages worth of ammo as we went. I started with 2 pistol mags on the belt and one rifle mag since Stage 1 was both rifle and pistol. From there I dumped partial mags in my small sling bag and pulled out a fresh mag for the next stage as I came off the just completed stage. It worked well in that I had what I needed but didn’t have a ton on the belt while running. In review of rounds fired, I could have gotten by with one less mag each for rifle and pistol, but the weight penalty wasn’t too significant, and it gave me both insurance rounds and spare magazines should a mag get lost or suffer a severe malfunction.

One final note for matches with a variety of problems to solve… the key is consistency in doing most things well instead of having really good and really bad performances in different areas. In this case, I wasn’t the fastest runner, but I shot well enough to have a good blend that allowed me to finish 1st place. 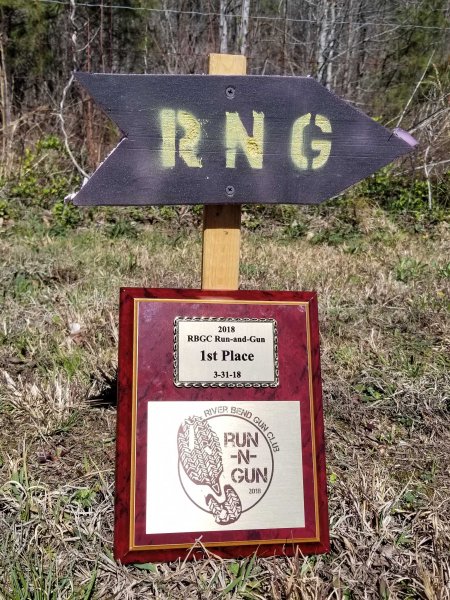 Finally, RBGC was one of the places that I got started in competitive shooting, and it was great catching up with old friends that I hadn’t seen in a while. Sorry if I didn’t get to meet up and talk to everyone. I’m already looking forward to the next one of these.

Here’s the link to the gear load-out post for this match.